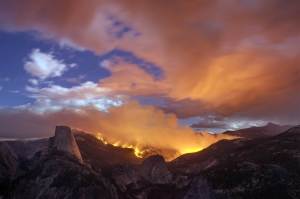 This is the second half of a two-part story.  Part I is here: https://thelatebloomerhiker.com/2014/10/03/wildfire-in-yosemite-part-i/

No time to panic here, first find out where we are at and then determine our options.  Getting the GPS and our map, we determined that we were about three or four miles east of Little Yosemite Valley and the Merced River.  It was hard to tell how far we were from the actual fire at this point, but knew that it was generally to our east around Babcock or Merced Lake.   Our options were limited because the other paths out were both uphill which would slow us down.  We just descended 800 ft. and there sure was a lot of timber fuel back there.  Our only real choice was to head west.

We picked up the pace  when the first chopper flew in front of us – about 1/2 mile or so.   It had a bucket hanging underneath.  Well, at least the calvary was arriving.   As we came across a saddle, we saw a horrifying sight.  The fire was crossing a canyon to our left and climbing the mountain.  Was it moving east or south?  It was hard to tell.   At this point, we kept going but discussed what we would do if we were boxed in by fire.   One option was to find rocky terrain  or a meadow with little or no fuel.   Another was to find a creek or body of water, but the nearest was the Merced River.

A few minutes later, another helicopter was circling less than a mile away.  We heard a loudspeaker but were unable to make out what they were saying.   Two more mule deer ran across the trail about fifty feet behind us.  They were heading in a northerly direction.  The helicopter was making concentric circles and came within 500 feet of us.  This time we clearly heard the loudspeaker as it blared: “There is a wildfire burning to the east and heading this direction.  Make your way to Little Yosemite Valley immediately!”

We were around 30-40 minutest from the rally point.  Would they evacuate us from there?   We kept pushing and noticed that smoke was starting to appear in front of us.    Up ahead there was a clearing with a person.  As we got closer it became apparent that it was two people.  One was laying down and the other was frantically waving at us.  It was a woman waving and a guy was laying down.  I asked what happened and she said they were running when he collapsed.  I checked for a pulse and breathing and found both.  He seemed to have passed out, but it was hard to tell if he had suffered a heart attack.  He started to come around and we propped his head up on the pack.  He was delirious and then I noticed that he wasn’t sweating.  I asked the woman if she had any water to give him and she told me they ran out about an hour ago.  At this point I guessed that he was suffering from heat exhaustion or heat stroke.  I gave him a small amount of water and moved him into the shade of a big lodgepole pine.

I told my wife and brother to continue on to Little Yosemite Valley and that I would stay behind with these two.  I gave them our GPS coordinates to pass to the rescue personnel.    I also activated my SPOT GPS locator.  I told the woman to gradually give her friend some water and I would attempt to signal the helicopter.   It was still making circles making announcements but did not see us.  Getting my signal mirror out, I started aiming at the chopper.  One, two-three times.  Wait…..one, two-three.  After 10-15 minutes the pilot turned in our direction and descended.   I immediately laid down on my back with my hands extending out – the international signal for distress-“need medical attention”    The clearing was large enough for them to land.  A rescue crewman jumped out and checked out the downed hiker.   We helped carry him to the helicopter in a stretcher and there was enough room for all of us.

Half Dome from the “other side”.

Lifting off, I had a brief flashback from my time as a naval aircrewman going through survival training.   Only this time, I was the one being rescued.  Flying by Half Dome,  you could see a crowd of people waiting to be rescued.  We landed in a staging area near the Ahwahnee Hotel where the hiker was taken by ambulance to the medical center.  We would later find out that he suffered from heat stroke but would recover.  Now, concerned for my family, I tried to find out what they were doing to evacuate the people in Little Yosemite Valley.   Within minutes, another helicopter landed and four people emerged.  I asked one of them where they came from.  They said that they were picked up in Little Yosemite Valley and that there were over 50 people left.  I prayed again for my family’s safety and another chopper landed with four more people.  You could see the smoke plumes from behind Half Dome as they went straight up to about 9-10,000 ft. and then blew in a westerly direction.

The landing zone for the helicopters was cordoned off by the park rangers, so I dropped my pack and waited as close as possible to the boundary.  Several more landed and finally by wife and brother emerged.   Hugging them both,  the first thing out of my brothers’ mouth was “Where can we get a hamburger?”  Yep, that’s how it ends.

While this story was fiction, a wildfire caused by lightning did occur in Yosemite National Park east of Half Dome in September 2014.   The “Meadow Fire” consumed almost 5,000 acres and took several weeks to contain.  Over 100 hikers were evacuated from Half Dome and the area around Little Yosemite Valley.   The National Park Service led an orderly evacuation.  Fire is one of many hazards that one can encounter in the backcountry.  Always let someone know where you will be hiking and discuss events like flash floods, lightning and fire.

Yosemite In The Spring – Part I

When my friend asked me to go camping in Yosemite this spring, it took about two seconds to say yes.  Each season in this place promises to provide a different perspective on the ever-changing landscape.  This was an opportunity to hang out with him and his family and do a few day hikes in the valley.  With the upcoming Memorial Day holiday, the campsites were full.  These things fill up quickly with all variety of campers.  From ultralight tents like mine, to tent-condos and vintage RVs, you will see them all.  Not one to enjoy being around throngs of people, I found the car camping experience in the Upper Pines Campground to be very decent.  Most people are good neighbors and obey the multitude of rules.  Other than the 0730 trash trucks, it was fairly peaceful.

Pollen is abundant in the valley and the conifers were producing it in vast amounts.  Hay fever sufferers, beware – get your shots and/or bring your antihistamines with you.  Diligence with your food and toiletries is required while camping here as the vermin are quite adept at the snatch and grab, especially the ravens and squirrels.  My friends watched as a squirrel disappeared under a neighbors truck with the doors open;  the rascal emerged with food in a matter of seconds.  He went right for the boxed graham crackers, found the bag, eaten through the box and extracted his morsels before they knew what hit them.  I love animals, but thought back to what I would have done as a kid in this campground.  A sling shot would have been awesome.

At night, the muted roar of the Merced River beckoned me as I drifted off to sleep that first night.  Soon, I would venture out with my friends on a trek to Nevada Falls via the Mist Trail.  Having done this cardio extravaganza in the fall of 2010, I was excited to see the volume of water during the spring snow melt.  I read in the Backpackers magazine that 90% of hikers hike only 10% of the trails in Yosemite.  Well, I think that 99% of the visitors to Yosemite hang out in the valley and then go to Vernal Falls.  Crowds aside, the steady climb up to Vernal is rewarded with the drenching mist probably similar to Niagara.  The granite steps would give a stair-master competition.  The one thing that kept me going was the humility of having an old person pass me up on the steps.  At the top, the volume of water is near flood stage compared to the previous fall flow that I witnessed.

The trail continued up to Nevada where you cross the Merced and I was in awe of the speed of the water as it rushed through a shallow granite track into a 90 degree curve.  The sheer power of the current is amazing.  You get a respite from the incline and then start a steep ascent over the manmade steps.   This section of the trail is a testament to the trail builders over the years.  The huge slabs are cut and fit together like a puzzle.

Nevada Falls was busy, but there was plenty of room to spread out.  This cascade seems even more powerful than Vernal because the water is funneled through a crevice that is maybe 6-8 ft. across.   The roar and subsequent plunge is impressive.  Glacier Point fills the western vista and hawks lazily glided around the nearby Liberty Cap.  Even with all the people, it was peaceful to lay back and take it all in.

The walk down the John Muir Trail is always a treat.  As you progress down, you get quick showers from above and obtain postcard views of Half Dome, Liberty Cap and Nevada Falls.   This is a shared trail and we encountered a couple of riders on a mule and quarter horse.  It can get slippery as the sand covered rocks keep you alert as you try to prevent rolling your ankles.  We returned via the JMT to the Mist Trail down to the valley floor.

At just under 7 miles, this loop is a good workout, full of killer views.  Due to the crowds in the spring, I would recommend a late start – like after 1 or 2 in the afternoon.   The risk with an afternoon hike is the occasional thunderstorm. Most  people start up around 0900.  Half Dome bound hikers pass by this way and it’s worth the stop. 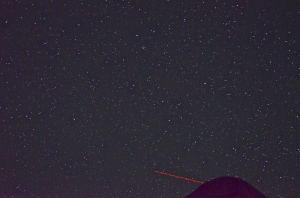 God certainly knew what he was doing when he created this place.  It’s best enjoyed with family and friends.