A Hike in the Snow – Spitler Peak

Type of trail: Out and back, composition: sand, decomposed granite, soft soil.  That and about 18″ of snow.

As a kid living in the northeast, I loved it when it snowed.  Enough of the white stuff meant a day off to play.   After you grow up and you have to shovel or scrape the ice off the car,  it isn’t so fun anymore.   Today, we would seek out a snowy trail south of the San Jacinto Wilderness.   I’ve been in this area a couple of other times and enjoyed the solitude and varied terrain.  We brought some friends with us today and I promised them a challenging hike with views of sub-alpine valleys and vast, arid Borrego Desert.

Within the past week, we’ve had our seasonal rains in San Diego County, so we hoped for a bit of snow above 5,000 ft. Just last weekend, we were on the beach roughing it in the RV.   The typical winter day near Oceanside was mid 60’s, great for walks on the shore watching the snowy plovers nesting.  Anyhow, there aren’t many places in this great country where you can go to the beach in shorts one day and hike in a foot of snow the next.

Our friends asked if they should bring their gaiters and I’m glad I said yes.  The trailhead had about 6 inches of powdery snow which meant the higher elevations would definitely have more.   It was strange to see snow amongst the chaparral, cactus and agave.  The wind was gusting around 10-15 mph and the temps were around 45-50.  After a couple of miles of intermittent snow and dirt, the trail gradually changed to all snow.  Eventually, the only tracks were our own and the occasional cloven hooves of a deer.  As the trail wound its way toward Spitler Peak, the northern exposure provided us with increasing snow depths approaching 18 inches.  We probably could have used snow shoes at this point, but the powdery texture made it easy to follow the footprints of the first hiker.

The chaparral gradually changed into mostly deciduous trees covered in a blanket of snow, which was falling on us.  The trees would continue their attack on us as the occasional gust would loosen clumps   As we neared the summit, the steepest part of the trail was also the deepest and the surroundings became more like an alpine wonderland.  We looked forward to the intersection of the Pacific Crest Trail where we would have lunch and some hot tea.

The 2,000 ft. of elevation gain was a challenge on any day.  Today, coupled with the snow it was slow going as the snow began to cling to our boots and gaiters.  Each step was a bit heavier, yep snowshoes would be good right about now.  We rounded the last switchback and the blue sky opened up as the trail marker for the PCT poked out through the rocks.  The desert vista to the east was beautiful as always.   Our shelter of trees gone, the wind chill made it feel like it was 30 degrees.

Lighting the small MSR Pocket Rocket stove proved to be difficult today.  The combination of wind, high altitude and low temps make these little stoves with the butane-propane a mediocre choice in these conditions.  Lesson learned-keep a small canister of fuel in my jacket to help the fuel condense.   The wind chill began to affect my dexterity too.   After 5 minutes or so, I finally got it lit, boiled our water and enjoyed a nice hot cup of Earl Grey.  It’s the little things…..

The trip down was much faster and a bit slippery.  The steady dose of sun created a frequent snow shower as we passed under the trees.  Mary put on some micro spikes and they really made a difference on the icy patches. 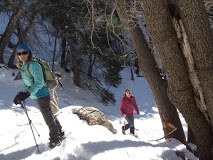 As we descended through 5,500 ft, the trail became a mix of mud and slush.  I gave up my trekking poles so that my friends could have that extra “leg” on the way down.  I’ve developed some trail legs over the last few years and rarely stumble.  Besides, I’m short and don’t have far to fall.  The last couple of miles became a bit tedious as sloshed our way to the trailhead.  Fifteen minutes later, the Paradise Cafe  near the town of Anza awaited us with the promise of amazing baby-back ribs, flatiron steak and delicious burgers.  Yes, the best way to end an awesome hike is with a fantastic meal.