Kearsarge Pass – A Thru Hiker Highway

Ask any Pacific Crest Trail (PCT) thru-hiker about Kearsarge Pass and they will confirm that it is a main resupply route.  We would run across more PCT and JMT hikers than ever before.  Generally, they are the most laid back people you will meet.

After a restless nights’ sleep near Pothole Lake, we decided to leave our camp set up and venture out west of the pass.  A nice breakfast of bacon and eggs got us going.  The crytallized eggs are real and when mixed with water, scramble up perfectly.  The pre-cooked bacon is trail ready and is good to go.  We lightened our packs and carried enough supplies for our day hike.  The plan was to drop down into the Kearsarge Lakes area and grab lunch next to the water.

Our camp was within sight of the pass so the last 400 ft of elevation gain was easy-peasy.  There was one other hiker taking a break and we dropped our packs to soak in the vista.  The views to the west were beautiful.   In the Sierras, one will run out of words to describe the scenery.  There were several lakes below;  one I recognized from the map as Bullfrog Lake.  We wanted to explore down below so we ate a snack and chatted with a thru-hiker going back to town for resupply.  Like so many other long distance hikers we’ve seen, he looked like he was in need of a bath and some good food.  We started down, the slope steady with what appeared to be pulverized granite rocks for the trailbed.

We ran into a few day hikers huffing their way up and stepped out-of-the-way.  Trail etiquette being what it is, the uphill hiker has the right of way.  We ran across a lonely stream making its’ way down to the lakes.  The source of water appeared to come out the side of the mountain.  A bullfrog could be heard croaking steadily.  We never saw it, but heard that sucker for the next 30 minutes.  We made our way down some switchbacks to a trail junction. 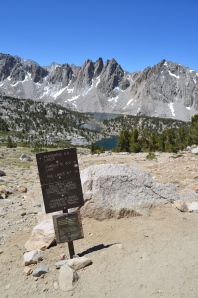 Wishing that we had more time to hike to Charlotte and Rae Lakes area, we hiked another 1/2 mile or so to the Kearsarge Lakes area.  The trail is fairly well-defined and meandered down to the first lake.  It was warmer now, around 75 degrees and other than a few people fishing on the other shore, very quiet.  The only other sound were the streams emptying into the lake.   We took off our shoes and stepped in to the cold, clear water.  After a minute, the bones in my legs started aching.  Well, probably not but that’s what it felt like.  It was brisk and felt good on our hot feet.  The trout were jumping every few seconds.  The Golden Trout Wilderness is aptly named.  We discussed getting our fishing licenses and gear before our next hike into this area.  I can taste the fresh trout cooked in a pan with just a touch of lemon and garlic. 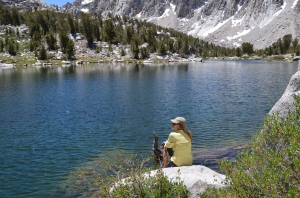 After eating our lunch and filtering some water, we reluctantly started back up the trail.  The climb out was less strenuous than it would have been with a full pack.  We ran into a PCT hiker who had lost the cap to his water filtration chemical bottle.  It was tiny and we struck up a conversation and he eventually found it.    As I was taking a breather on a bend in a switchback, another hiker was coming up behind.  I usually ask hikers where they are coming from or where they are going out of curiosity.  She was a PCT hiker, who had recently gotten back on the trail.   She passed me and struck up a conversation with my wife who  (as always) is ahead of me.  They immediately hit it off and continued talking as we slowly made our way up to the pass.  Conversation is a good diversion when you are in a steep climb.  Of course it helps if you’re not out of breath.

The women continued to chat and it was a nice experience to meet a thru-hiker who took the time to relate their experience on the trail.  PCT hikers run the gambit from those that are on a sabbatical to modern-day hippies.  Sometimes I believe that long distance hikers are a sub-culture within our Americana.  Her trail-name was Pillsbury,  and she was quite the character.  Before long, we reached the pass where we hung out with Pillsbury and the other PCT hiker who went my the moniker Dances with Bacon.  He was a nice guy and we chatted for a bit.  Heck, with a trail-name like that, he couldn’t be bad. 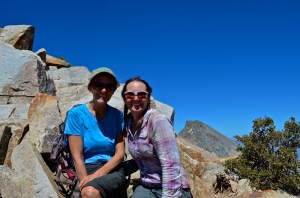 Pillsbury  wanted to take some fun pics, so she climbed an outcropping and asked me to take some pics with her camera.  She got up her nerve and did some hand-stands.  The blustery wind was a bit much and I was glad when she finished.  She was heading into town to resupply and had another 4-5 miles to go.  While it’s mostly downhill from here, the town of Independence is about 13 miles from the trailhead in the Onion Valley Campground.  We enjoyed our time with Pillsbury and parted ways when we reached the part of the trail where our camp was located.

We had time to enjoy our camp this time.  It was nice at the site and we didn’t rush through dinner.  The Black Bart Chili tasted great.  It’s one of our favorites.    As we settled in for the night, the wind was not as strong so the water from the lake was not lapping the rocks as loud as the previous night.  Did I mention that the first night, the sound of the water was like footsteps? We were sure that someone (or some thing) was walking around our tent.   Freaked us out for a few minutes until I stuck my head out of the tent around 2 a.m. and discovered it was the sound of wind-driven water against the shore of the lake.

No AMS symptoms tonight, we were fully acclimated.  Slept soundly and awoke to a crisp Sierra morning.  Not wanting to cook breakfast, we had some snacks and departed our hidden campsite on Pothole Lake.  We took a different route out and had to do some boulder scrambling.  Not sure that it was a wise choice.  A fall here would have hurt. 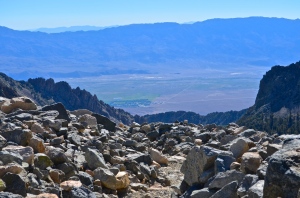 Our walk down was fairly quick and the scenery nice.  The coolness of the air as we went in and out of the forest was refreshing.   The lakes that we had passed going up looked so different.  Still lots of jumping trout though.  We took a break near a cascading creek, the breeze and sound of rushing water enough for one to desire a nap.

This hike was a good one for many reasons, but it turns out to be our best way in for our JMT section hike next year.   The JMT is a short trek from Kearsarge Pass.  Mt. Whitney, here we come.

Some lessons learned on this trip:

– We experienced mild Acute Mountain Sickness (AMS) symptoms on our first night.  Our symptoms were headaches, nausea and a bad nights’ rest.  While we have camped around 10,000 ft. before, on this trip, we left San Diego in the morning from an altitude of 500 ft.  Ten hours later, we were at 11,400 ft.  Our bodies didn’t have a chance to acclimate.  Recommendation:  When hiking at high altitude, camp at a lower altitude on the first night to give your body a chance to adjust.

– Dehydrated foods take longer to cook at high altitude.  In our case, the normal 12-15 minutes of rehydration took almost 30 minutes.

– If given the opportunity, start a conversation with fellow hikers.  You will meet the most amazing people from all walks of life.  Many have funny, interesting stories from the trail.  You won’t find many creeps out here – they’re mostly back in the cities.

– Take the time to kick your shoes off and enjoy a dip in the water.  Next time, I’m up for a swim. 🙂 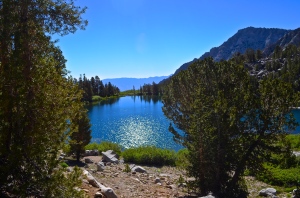