Ask any hiker that ventures into the backcountry what the hardest part of the experience is and many will say “the mental part.”   Up until we logged hundreds of miles on the trail, I’m not sure if this would have made any sense.   Our recent journey off the path reiterated the mental part.  The fun began after we arrived at the Onion Valley Campground parking lot, fifteen miles or so from the tiny town of Independence.

The drive up from the town is an experience.  The road starts with a gradual climb out of the valley and the 180 degree switchbacks made it an exciting ride in our old BMW.   We saw mule deer along the way.  Be careful of the occasional rock in the road, especially at night.  The campground isn’t much in itself.  It’s pretty much a tent-only camp tucked away in the small valley where summertime temps creep into the 80’s.  At over 9,100 ft.   Independence Creek flows nearby.  We would park in the hiker’s lot and noticed a few hikers finishing their trek.  It was mid-late afternoon and some were looking for rides into Independence or Bishop.

The parking lot has a double vault toilet and cool creek water through a spigot.  In the summer, there is always someone coming or going here.  We started up the path sans hiking poles and my wife found a nice wooden hiking stick that another kind soul left near the trail-head.

The Kearsarge Pass trail is a steady climb, averaging approximately 600-700 ft. per mile.  Well maintained, it gets a lot of traffic during the summer.  About half are day-hikers and those fishing.  The mild winter was kind to the trail and it was in good shape.  Since this was a 3 day hike, we packed extra food and enough clothing to change out.  Our packs were light compared to our previous JMT hike, but I might as well have been carrying a couch on my back-that’s how it felt after a couple of miles.

For me, hiking is one of those activities that demands everything you’ve got.  Unless you are a thru hiker or able to do this every week, it pushes you.  That’s part of the reason we do this – it is a mental and physical challenge.  Do this, and you can handle anything life throws at you.  My takeaway is “mind over matter”.

This hike starts out with typical scrub and manzanita.  Expect a warm one in the summer unless you start early.  Around 1.5 miles, you’ll pass next to a nice cascade fed from the lakes above.  Within another mile, we passed a couple of lakes, teeming with trout.  Experienced our first mosquitoes around 10,000 ft., but not too bad. 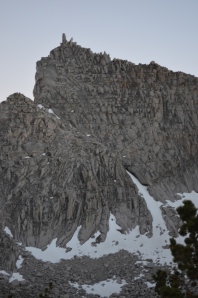 The terrain gradually changes into a sub-alpine with a mix of pine and deciduous trees.   There is ample shade as you pass the 2-3 mile mark and the climb gets a bit harder with stepping-stones that test your endurance.  The wind picked up and it started to feel cool.  As long as we kept moving, it was ok.  Stop too long and it got cold.

We pushed through and around 6:30, began looking for a campsite.  The trail map showed a couple of more lakes within two hundred yards of the trail.  Nice, or so I thought.  The first one – Heart Lake was a disappointing 5-600 ft. descent so we passed it up.   My goal is to almost always camp near a water source.   Only one more lake on the map before the “summit” so this was it.  I took a GPS reading and compared it to my Tom Harrison map.  I confirmed there was a lake below when I asked a passing hiker.  He was young and had his earphones in so, I asked a couple of times – “Hey is there a lake down there?”  He nodded yes, so we began to look for a way in. 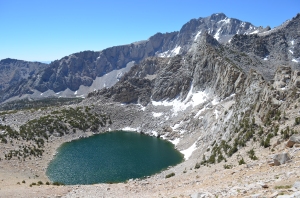 Looking down on Big Pothole Lake.

It was after 7 p.m, and getting colder so we began our way down crossing through a talus field of assorted boulders.  About two hundred feet in, I spotted a primo campsite.  Flat, sandy and large enough for our little Eureka tent.  We settled in quickly and had dinner going within 20 minutes.  At 11,400 ft.,  the air chilled as the sun settled behind Kearsarge Pass.  I scrambled 200-300 ft. down the slopes of Big Pothole Lake to filter some much-needed water.  Six liters later, I slowly climbed back to camp.  Much of this water was for our base camp. We try to “tank-up” before hitting the trail because water is so heavy.

There was a strange phenomenon up here.  Moths, thousands of them inhabited the little pines.  At dusk, there were bats.  They would swoop in, emitting their sonar like squeaks.  It was quite the feast for them.  Never knew there were bats this high.

It was a chilly night, windy with temps in the 40’s.   Not bad, but the wind chill made it seem cooler.  This close to the pass, a stiff breeze was inevitable.  We snuggled into our sleeping bags, each of us with persistent headaches.  The thought of Acute Mountain Sickness (AMS) was at the front of my mind.  We were camping at the highest we’ve camped yet.  A couple of motrin helped to knock the edge off.  If the headaches persisted or other symptoms like nausea and dizziness occurred, we would have to descend.  Neither of us slept well. 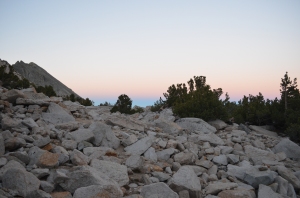 Sunset. Our talus backyard in the foreground of the eastern sky.

Next:  Pillsbury Does a Handstand at Kearsarge Pass.

When I asked my wife of 32 years what she wanted to do for our anniversary, she said “a backcountry trip.”  Men,  I know many wives will want to be pampered on this special day, and rightfully so.  Rare is the woman who will endure a trip into the wilderness to endure calf burning,  boulder scrambling, fending off mosquitoes and chilly nights to celebrate a wedding anniversary with her husband.

Even with a 3 day trip, there is a lot of preparation.  I pulled out the gear and checked  everything out.   The cats love it when I set up the tent in the living room.  Five tough miles from your car is not the time to find out your water filter pump doesn’t work.  Checklists are always great, but as you will see – not foolproof.

The eastern Sierras offer miles and miles of trails, most with ample supplies of water – even in the terrible drought that California is going through.  I’ve heard of Onion Valley, one of the more popular entry/exit routes by PCT thru-hikers.  Many will go through Kearsarge Pass to the Onion Valley Campground and hitch a ride into the little town of Independence to pick up a resupply, or catch a ride into Bishop.

The drive from San Diego County is around 4-5 hours through the pain-in-the-butt Riverside/San Bernardino area.  Mostly a pain because of the weird road patterns and traffic congestion.  Going up, we missed the Hwy 395 turnoff and kept going to take Hwy 58-E to Bakersfield.  It was actually better; while longer in mileage, we missed the 395 construction and endless traffic lights in/around Victorville. 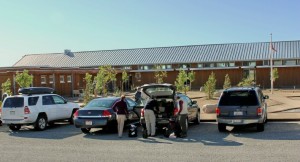 Oh, before I forget I’ve learned some tips on getting permits for your trail of choice.  Many trails in the California wilderness require backcountry permits issued by the state or feds who manage the areas.  After researching the general area you want to hike, you can go to www.recreation.gov and register for an account.  Most decent trails have a quota system for overnight stays to minimize the environmental impact.  Typically, the recreation.gov website will issue 60% of the permits online, the other 40% for walk-ins at one of many locations-depending on where you want to enter.  Here’s the rub:  If you reserve online, there is a $5 per person and $6 processing fee.  If you do a walk-in it is free.  Reserve early, the popular trails fill up quickly.  I actually wanted to reserve Kearsarge Pass, but all the permits were issued so I applied for a nearby trail – Golden Trout.  Once I paid the $16 fee, I confirmed the day prior and locked in the reservation.  On the day of our arrival, I checked in at the Eastern Sierra Interagency Visitor Center and asked if I could obtain a walk-in for Kearsarge Pass.  Sure enough, there were permits available and the Forest Service ranger changed our permit-free of charge.

Looking down at Independence, Ca. through a talus field.

So, if you want to lock in a trail permit, do it online for a fee.  Otherwise, if your plans are flexible, pick out a few trails ahead of time and do a walk-in.  The visitor center in Lone Pine handles most of the permits for the Hwy 395 corridor.  It is the busiest on Fridays during the summer.    Arrive early to get your trail of choice.  It’s a nice facility with tons of information and a nice touristy shop.  They have decent trail maps, so stock up!

A little more on trip planning.  Be prepared for a variety of weather when camping.  In our 5th year of hiking, we’ve experienced snow in June.  The puffy jacket, knit cap and gloves are worth the extra pack weight.  Rain gear is good and will ward off hypothermia while hiking in the wilderness.  Bear canisters are often mandatory in much of the Sierras.  Sure, you can still hit the trail without one, but I’ve talked to many who have had their campsite visited by the wandering Yogi.   You can try hanging your food bag from a tree, but it’s known that mother ursines teach their young how to knock down the yummy treats at an early age.  Besides, the trees above 10,000 feet are pretty short.

So, preparation and some common sense backcountry lessons learned are key to an enjoyable trip.  Oh, even using a checklist the hiking poles were hanging in the garage where I left them.  My knees hate me.

Next: Kearsarge Pass – Mind Over Matter