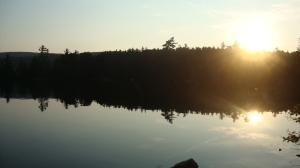 The weather for this trip was mostly awesome.  Sunny, clear skies, temperature in the 70’s.  I imagined how much harder this would have been if it had been raining.  The bogs would have become swamps, instead of rock hopping across streams, we would have been fording.  We began our 8th day earlier than usual on the shores of Rainbow Lake.  With 7 miles to Abol Bridge, we were ready to finish this marathon.

Making our breakfast, we would hop out on a rock and eat on Rainbow Lake.  The water was like glass, the air still.  The sun had not yet climbed over the trees. The quiet enveloped us and the solitude was remarkable. 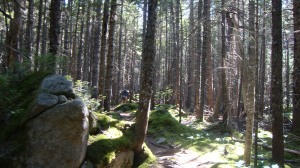 All I want is a cheeseburger.

Packing up, we hit the trail by 6:30 or so.  Only one more “hill” to climb and one more lean-to.   While the trail wasn’t as difficult as the first 50 miles, it wasn’t a walk in the park either.  As we walked, our talk turned to food again – our favorite fast-foods and desserts.  We both agreed that cheeseburgers were from angels and that we were going to get one after we emerged from this moss encrusted forest.  The miles clicked by slowly on my GPS, each 1/10 of a mile taking forever.  It probably wasn’t a good idea watching the mileage on my Garmin, kinda like watching water boil in a pot. 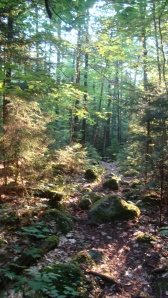 We would climb to Rainbow Ledges, a slow steady incline that threatened to sap our last energy reserves.  This would be the 12th mountain, maybe the 13th in one week.  After a false summit, we would reach the plateau, a collection of granite slabs with blueberry bushes everywhere.  They weren’t quite ready to eat,  so we just admired the view of Katahdin.   We pressed on and the trail seemed to turn into a rock garden. 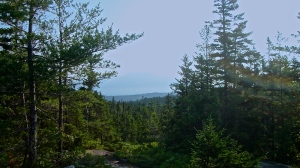 As we crossed one of the last brooks, we arrived at the Hurd Stream Lean-To.  This would be one of the first lean-to’s if you were a So-Bo on the A.T.  It was in fairly rough shape and looked small and uncomfortable.  I just can’t get into the spirit of the lean-to’s.

As we continued on, we realized that we were within a few miles of Abol Bridge.  We picked up the pace and took one more break on a big boulder in the middle of the trail.  A So-Bo approached and said “You know, there is ice cold Coke and ice cream at Abol Bridge”.  We all laughed because  we probably looked pretty bad with our muddy, sweat soaked clothes and gaunt faces.   We had one last snack and were determined to finish the last leg.  About two miles from the end, something in me snapped and all I thought about was a cheeseburger.  I ran past Joe who had been in the lead for 99% of this hike singing the praises of Jimmy Buffet’s “Cheeseburger in Paradise”   You know the tune.  The look on Joe’s face was one of confusion and humor.  Now, I was walking twice as fast as he, sometimes running as my pack and I were one.  I would stay in the lead until the end.

Still thinking about food and in a daze, I looked up and saw some people who I recognized heading southbound, but it didn’t click who they were.  It was Joe’s family who hiked 5 minutes down the A.T. to meet us.  We were happy to see them and enjoyed seeing someone we actually knew.  We walked to the last sign before exiting the wilderness and took our last pics.

Mission complete, it felt weird to emerge into civilization.  In the past week, we had walked for approximately 95-100 hours, taken over 250,000 steps, endured approximately 30,000 ft. of elevation change, crossed countless brooks and streams, walked across several miles of logs and planks, and  hopped thousands of boulders.  We never fell into a stream, into a bog, or down a hill.  We came close but were blessed with an accident-free adventure. 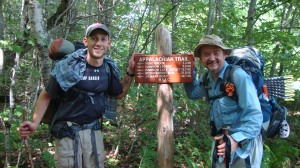 Mission Complete. Last sign in the wilderness near Abol Bridge.

Oh yes, within a few hours I would have my cheeseburger.  Sadly, my stomach had shrunk and I couldn’t even finish it.

My gear: Deuter ACT Lite 65+10 Backpack – Emerald/Anthracite A nice lightweight backpack that is tough as nails.  A waterproof cover can be purchased separately.