Glacier National Park – Up in the Clouds

Here’s the BLUF **on Glacier National Park: Add it to your bucket list of hiking.  On our RV trip to Ontario, Canada we had the opportunity to enter the states through Montana and sample this amazing area.  We stayed in a nice RV park just outside the main entrance to the park in St. Mary’s.  It was a mostly overcast day and we walked in to the Visitor Center.   By the way, cloudy days make for great landscape photography.   Since we didn’t have our vehicle that we tow behind the RV, we would have to rely on the GNP shuttle system.  The main thoroughfare – the “Going to the Sun Road”  has a limit of 21 ft.  All but the smallest of RVs are longer than that.  Sadly, we would have only one day in this magnificent park. 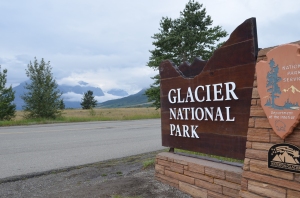 Anyhow,  not knowing which trails were the best, I asked the ranger which one would be a good day hike.  He asked me great questions like “Is this your first time in the park, how far/how much elevation change do you want?” He pointed us to the Piegan Pass – Siyeh Pass trail, a 10+ mile with approx. 2,800 ft. of elevation gain.  He mentioned that it provided the most bang for the buck for a single day in the park.  Looking over my shoulder, my wife motioned that there was a shuttle loading, so we hustled over.

The shuttles vary from small 16-20 passenger ones to city-like busses. The first few miles of road were paved and then changed to gravel.  Construction crews were making the most of the brief summers, so there are usually delays.  Thirty minutes later, we were hopping off and noticed how low the clouds were.  Oh well, we were prepared for most weather conditions.  We usually pack our layers, warm jackets and rain gear. 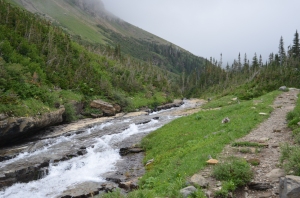 The Piegan Pass trail started out following a rushing creek, elevation was around 5,400 ft.  Going-To-The-Sun Mountain was shrouded by clouds which were hugging the peaks.   Oh, did I mention that Glacier has grizzly bears?  I’ve hiked for several years in different parts of the U.S., but grizzlies scare me.  Most bears are dangerous, including blacks and browns, but the grizzly is just a massive creature that you don’t want to startle.  We would be prepared though.  I had the bear spray in a holster, my wife had a bell on her backpack and we made plenty of noise with our hiking poles.  It helps to talk loudly too.

We were probably over-cautious, but in my mind – one of the worst things that you can do is surprise a grizzly feeding, or one with cubs.  The trails in Glacier have plenty of bushes – and huckleberries.   The trail was as awesome as the Park Ranger said it would be.  He mentioned that we would pass through several eco-systems.  It was very green here in a Riparian like zone.  The lilies had already bloomed but there were many other wildflowers around.  Saw our first bear grass, it really sticks out like the yucca plants in the desert.  We entered a forest area with a significant canopy.  I’m sure Glacier National Park is a botanist’s dream in the summer.  There were so many varieties of plants with pines, firs and those quaking aspen trees.  The mushrooms do well here with the moist climate around 6,000 ft.  A light rain started, and the temps dipped into the 40’s so we put on our rain gear. 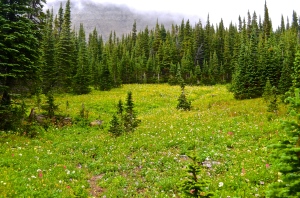 Passing through the ecosystems. A meadow full of wildflowers.

We took a lunch break under a stand of small pines near the Siyeh-Piegan junction and were joined by a few others.  We met a nice German couple who were appreciating the American wilderness.  They and another group decided that the cold, wind-driven rain was too much and turned back.  We sized up the weather and pushed on, determined to follow the U.S. Postal Service’s old motto ” Neither snow nor rain nor heat nor gloom of night…” ; well you get the gist.

Imagine if you had all the time you needed to just wander and appreciate the beauty of this area.  You would learn many of the plant species and see so much wildlife.  Wishing that I had more time, I was in awe of the land around me.  It’s easy to let your mind wander as you walk along the trails in Glacier.  The trail opened up into a valley that was crisscrossed with streams.  The far off glacier was feeding the alpine lakes and tarns.  The overflow from these would create little tributaries that would make their way down to St Mary Lake, the second largest in the park.

I could barely make out Siyeh Pass as it was partially obscured by clouds, but a couple of hikers 10 minutes ahead assured us that the switchbacks would take us over the top.  The wind picked up as we passed 7,000 ft., and it began to sleet.  Nothing too bad, but enough to second guess my decision.  Actually, no hike is worth putting yourself in jeopardy.  Weather conditions can change rapidly up here, so you have to be prepared to deal with it.  We were almost to the summit, so we kept going.  What came next?  Snow, of course!  Nothing too bad, flurries.

At the summit. Downhill from here.

We hit the summit and the views were phenomenal.  One can run out of adjectives trying to describe what the eyes behold.  At Siyeh Pass, we saw several glaciers and a long, deep valley.  Pushing on, time to go downslope.  Oh, man the view looking south was sweet.  The clouds parted, with an excellent view of St Mary Lake and a glacier to our right.  The vegetation ceased awhile ago, probably because the winds up here can be fairly harsh.  The rocks were colorful with red and purple hues.

A break in the weather.

There were more switchbacks on the Siyeh Pass side and the trail was full of scree and slow going.  The clouds enveloped us again and visibility was reduced to around 100 ft.  I saw something move ahead, off the trail and froze.  Hoping that it wasn’t a bear, I raised my hand signaling my wife to stop.  The mountain goat was passing from right to left and was curious.  She maneuvered in an arc around us and climbed a rock and came to within 20 ft.  My camera always at the ready, I snapped away and noticed a family of goats about 75 ft away.  A small juvenile hung in the back and peered over a ledge at us.  We watched them for the next 10 minutes and continued back down.

A mountain goat keeping an eye on us.

The clouds seemed to absorb some of the sound as we entered the brush and bear grass.   We started making noise again, sometimes breaking out into a song or two.   Ahead, there was fresh scat on the trail.   Hmm, huckleberries.  Bears love them.  This bear was on the move because there were 4-5 splats on the trail in a few different areas.  Maybe he heard us singing.

We sped up a bit, trying to make the next shuttle.  I think the eastbound shuttles run every 30 minutes.  The last couple of miles were long as we passed through brush along side a fast flowing creek.

We came out on the Follow-The-Sun Road about 100 yards from the shuttle stop.  We logged about 10.7 miles with about 2,800 ft. of elevation gain and 3,500 ft. of loss.  All in all, this trail ranks in our top 5 ever.   Gotta come back to this place-so much to see.   I think July and August are the best for hiking here.