Wildfire in Yosemite – Part I 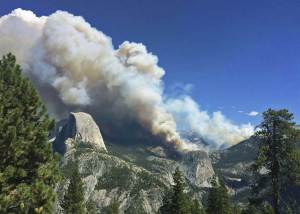 We were finishing up a section hike of the John Muir Trail in early September.  The trip from Mammoth into Yosemite was filled with the most amazing views.  In Devil’s Postpile Campground, it was nice to gather around the fire to talk about our upcoming adventure.  During our hike, we observed that most of the terrain around the JMT was pristine.  There was an area near Devil’s Postpile that had recently burned.  It was apparently caused by lightning.  The weather was perfect as we skirted thunderstorms for the past couple of days.  Late August or Early September is a good time to do backcountry in the Sierras.  Much later and the chance of snow really increases.   The mosquitoes are not as bad and stream crossings are usually a bit easier.   We met some southbound hikers before Donohue Pass that mentioned how they were pummeled by a storm, hail and all.   Noticed the first bit of snow at Donohue and made the transition from Ansel Adams Wilderness to Yosemite NP. The trek through Lyle Canyon was at a fast pace as the storm seemed to be on our heels.    For most of the week, we went without a campfire since the USFS had a ban in place.

We passed through Tuolumne Meadows and enjoyed some non-dehydrated food.  Next was a glorious day spent near Lower Cathedral Lake where we made camp near the shore.  What a magical place.  The thunder continued to rumble around us through late afternoon,  but it never rained.  The next day we pressed on for 11-12 miles.   We were fortunate enough to nab a site with decent views of Half Dome which appeared a couple of miles away.  In Yosemite, below 9,000 ft. campfires were still allowed.   We gathered up loose firewood and proceeded to make a nice fire.  The site we picked already had a fire pit and we reinforced the edge with some additional rocks. 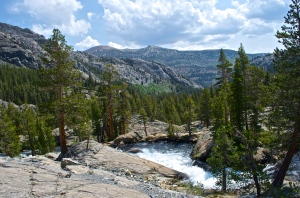 Before dusk, we went down to the creek to filter some water.  The water flow here was poor and the mosquitoes were swarming.  I pumped my water filter faster than ever before while swatting those pesky critters.  All week, we evaded them and wore long sleeves and our head-nets.  Tonight, I was bitten more while filtering than the previous six nights combined.  Oh well, we needed the water for dinner and some extra to put out the campfire.

After dinner, we noticed the skies had clouded up a bit.  We were spared from the rain one more night.   I thought about a previous camping trip where the rain serenaded me to sleep.  Next to a rushing stream, a light rain is the perfect sleep machine.  Sometime during the night, we did hear thunder as well as see the lightning as it lit up our tents.  It sounded like it was 10-15 miles away.  Our site was in a good spot and not in a flash flood prone area. 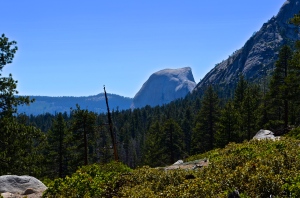 Approaching Half Dome from the east

By dawn, the far away storm had subsided.  We noticed the campers above us had packed up early.  They were going to Half Dome.  We ate a light breakfast, packed up and were on our way to finish our trip.  Today would be approximately 7 miles as we would pass the dome, Little Yosemite Valley, Nevada and Vernal Falls.

As we got back on the trail, we passed a small group heading back from a 3 day stay at one of the High Sierra Camps.  They were chatting how “glamping” was the way to go.  Glamping or glamour-camping is luxury camping.  You stay in a yurt, or cabin and receive room service or have your meals prepared for you.  Hmm, sounds nice after all.  At this point, we started talking about real food again.  While it had only been a few days since the cheeseburger in Tuolumne Meadows, the idea of fast-food still sounded good.

Eventually, we emerged from the canopy with Half Dome to our west and Vogelsang Peak to our east.  Suddenly, there was a thrashing sound to our left and a group of 4-5 deer bolted out of the forest in front of us.  What the heck?  Then we saw why they were running.  A white billowing cloud covered half of the horizon to the east.  Was it a cumulus cloud – or smoke?   The three of us stopped to get a better look.  Within a few minutes, it started snowing.  Except this was not regular snow, it was ash.  Now it hit us – forest fire! 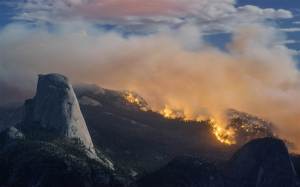