Encounter with a Grizzly in Glacier National Park – Part 2 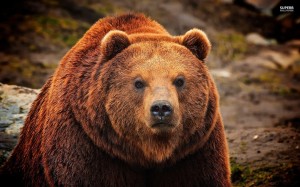 This is the end of a two part story.  Part 1 can be found here:

We entered an area of bear grass and watched as the breeze caused the creamy white flowers to sway in unison.  Figuring that we had two miles to go, I was ready to hop on to the shuttle and enjoy a nice steak at the restaurant in the RV park where we were staying.  The Piegan Pass – Siyeh Pass Trail had been an amazing hike thus far.   I noticed several piles of huckleberry-laden scat on the trail and slowed to see if it was from a bear.  As I got closer, I noticed steam rising from it.  I froze and raised my arm to signal to my wife who was about thirty feet behind to stop.   Suddenly, there was a rustling to my right and two bear cubs jumped out running across the trail.  Within seconds an adult grizzly appeared and stopped in the middle of the trail, between us.  I spoke in a calm voice and said “hey bear”.  The mother grizzly reared up on her hind legs and let out a snarl that resonated through every bone in my body.  I fumbled for the bear spray in the holster on my hip.

I told my wife to back away and not run.  Time seemed to stand still as the massive bear lowered to all fours and stared me down.  I think that I kept talking to her in a calm voice to avoid an all out confrontation.  At this point, she was probably 20 feet away as I continued to back away.  She was looking at me and snorting while occasionally making glances toward her cubs off trail.  Due to the adrenaline rushing through my body, my ears started ringing.  I flipped the plastic safety off the bear spray and put my finger on the trigger.  Not wanting to provoke her, I backed away and kept talking.   The grizzly rocked back and forth on her haunches, growled took a couple of steps toward me. 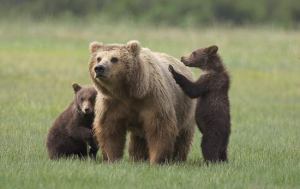 My mind was racing as I thought about what to do in a grizzly attack.  I avoided eye contact as much as possible since they see this as a challenge.  If attacked with this species, it is best to curl up or lay on your stomach.  Protect the back of your neck and play dead.  It is usually not effective to fight back unless you are being mauled and death is certain.  In the midst of this I prayed a simple prayer – “Dear Lord, please get me out of this alive.  Amen”

I had to put more distance between myself and this mad momma, so I must have done a moon walk or something because she was now 40 feet away.  Suddenly she snorted and charged, closing half the distance in a few seconds.  I raised the bear spray,  squeezed the trigger and swept it back and forth for a few seconds.   It created a cloud of industrial strength capsaicin between me and the angry ursine. 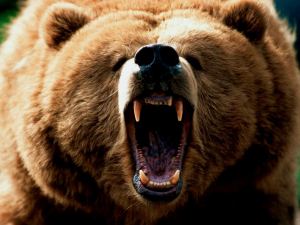 The cloud of pepper spray floated in the air.  The sow sneezed and let out a roar.  I backed up another ten feet or so preparing to give her another dose.  Everything seemed to be in slow motion again.   She advanced toward me again before suddenly turning and trotting toward her cubs.  Standing there, I came to my senses and started yelling for my wife.  Not hearing anything, I made my way back up the trail, blowing my whistle.  I heard my wife’s whistle and saw her about 100 yards away, standing on a boulder.

We hugged and talked about how we would get back to the trailhead.  Not wanting to back track for ten miles, we proceeded down the same path making a lot of noise.  I even let out a blast of a portable air horn that I kept in my survival kit.  We emerged into a clearing and increased our pace.  Passing a series of cascades that feed Saint Mary Lake, the beauty of the surroundings escaped me.

The remaining mile seemed to take forever.  We passed through one last forest and heard some cars as they traversed the Going-to-the-Sun-Road.  It was surreal as we stepped out on the road and made our way to the shuttle.  Breathing a sigh of relief, we boarded the shuttle and made our way back to the visitor center.  I reported our encounter to the ranger.  He mentioned that this was the second report of a sow and cubs on the Siyeh Pass Trail this week.

Back at the RV park, we went to the restaurant where I had the biggest steak ever.  That night and for many more, I would relive the experience and would wake up in a cold sweat. 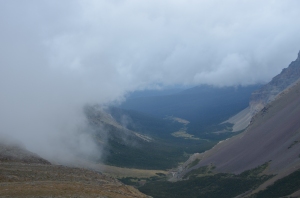 This two-part blog was a work of fiction.  If you have read some of my other tall tales, you probably knew that.  I weave a story together using actual hikes that we’ve done with some creative story telling.   Grizzly attacks are a rare occurrence in the U.S.  Some quick research showed five fatal grizzly attacks on humans in the lower 48 since 2010.   There are probably less than 1,500 grizzlies south of Canada.  Alaska is home to over 30,000 grizzlies.  Sometimes they are confused with equally aggressive black bears.   Bear-spray is probably the most effective deterrent for a charging bear.  Research, experience and statistics show that firearms are less effective than pepper spray.  Understand the risks where you hike and camp.  Take proper precautions and avoid hiking solo in areas with grizzly or black bear activity.  This is a good resource for understanding bear behavior: http://www.bearsmart.com/becoming-bear-smart/play

Hike strong, and for heaven’s sake take out that headset!

Some gear that we use:

I use a Nikon 3000 series camera and have really been pleased with it.  It is easy to use and takes awesome pictures.  It’s durable and has survived many hiking and camping trips.  Nikon D3200 24.2 MP CMOS Digital SLR Camera with 18-55mm and 55-200mm Non-VR DX Zoom Lenses Bundle