Type of trail: Out and back.

The Anza-Borrego Desert State Park spreads out across three counties and is the largest state park in California.  In fact, the second largest in the U.S. after Adirondack Park in New York.  It was actually named after a Spanish explorer Juan Batista de Anza and Borrego meaning “bighorn sheep”. [¹]  Like much of the golden state, the Anza-Borrego is a contrast in landscape and an opportunity for solitude. Part of the vast Colorado Desert, it is home to so much flora with animal life that is often hidden to the casual observer.

My favorite route to Borrego from north county San Diego is up the 15, skirting Palomar Mtn on the 76 and up the 79. The drive one of transition as you leave the coastal desert, pass through orange groves, around the beauty of Pala and Pauma Indian reservations and the high arid landscape flanking the west side of Julian.  Early morning is the best time for the drive as the sun starts to burn off the marine layers and clouds blanketing the Palomar range. Yeah, part of the fun is getting there.

Having never seen an oasis, I headed toward the park headquarters and made my way to the campground where the trailhead to Palm Canyon Oasis began.  Little did I realize that there was an $8 day use fee to park.  Lesson learned, next time park at the visitor center and walk the extra mile on a sidewalk with interpretive signs about the area.  You can also take a side-path that is full of wildlife.

The trail meanders through a canyon with evidence of a catastrophic flash flood that washed away huge palms and displaced massive boulders.  Farther up, trickles of water are the first evidence of the oasis.  Soon, the trickle turns into a stream with small cascades.  The wildlife is drawn to this area in the morning and after sunset.  Frequent this area and you are likely to see small herds of Bighorn Sheep.

The trail is the most popular in Borrego, so I recommend going during the week if possible.  I know, most of you work for a living but Sat/Sun is the busiest time on this one and the number of people just takes away from the experience.  Nevertheless, it’s a trip worth taking. 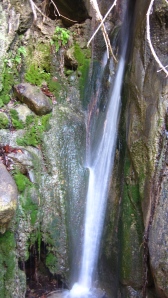 Parting of the boulders in Alcoholic Pass.

PART I:  The Anza-Borrego Desert is an amazing place.  I know,  to think of the desert as amazing is weird.  However, this desert in southeastern California is one of the most serene and beautiful places ever.  Anza-Borrego is well-known to southern Californians for its’ desert flower blooms in the early spring. It’s also known for the miles of jeep/RV trails and horseback riding paths.  Last year, we walked 7 miles down a jeep trail with the stiff desert wind filling our nostrils with the aroma of desert lavender.  This time, we were hoping to go higher and  find some elusive Desert Bighorn Sheep.

The intensity of the desert flower blooms in Anza-Borrego depends mainly on the amount of rain.  This past winter was one of less than average rainfall, so research on the Internet indicated that it would be a less than spectacular display.    Today’s goal was the Alcoholic Pass Trail, a path that would hopefully take us higher into the Coyote Mts for some views of the desert floor and Santa Rosa Mountains to the north.  Arriving just in time for lunch, we spread out the blanket in the sand behind the car.  It was almost like the beach except there was no water and lots of desert flora. 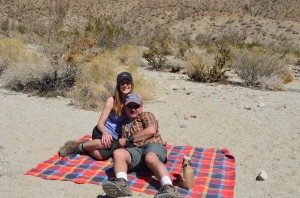 Picnic in the desert

The weather in the desert is a bit unpredictable.  In the early spring, it is fairly mild with few thunderstorms and constant winds.  It was a mild 76 degrees.  We hit the trail and the incline was steady with plenty of switchbacks and a lot of lizards.  The perspective of the desert floor changed constantly as we went up.  The barrel and fishhook cacti was colorful today.

We broke out into an opening where we signed the trail register.  It was cool to write our thoughts and place them back inside a Vietnam era 7.62mm ammo can which kept the trail register out of the elements.  Up ahead, we could see the Santa Rosa Mountains as we did some light bouldering and dropped down into the canyon.  The vastness and beauty of the surrounding desert was awesome.

The trail ended at this point in a desert wash.  I suggested that we climb an adjacent hill, and we picked our way to the top around various sized rocks and boulders.    The terrain was so rugged that we had only walked 2 miles in a couple of hours.  Normally, we hike twice as far.  As we looked around, we decided to head back west toward a high ridge.   Going off trail is usually an adventure and is where this blog gets interesting.

As we looked to the west, we picked out a reference and started making our way.  The scrambling over rocks was challenging, but the grade was not too steep.  Making our way through a few ravines, I commented about not seeing any footprints or horseshoe tracks.   Mary casually mentioned that there weren’t any footprints because we were on rock.  Sometimes, I just say goofy things.   The late afternoon heat was apparent, but we each had 3 liters of water and were well hydrated.  We stopped frequently to catch our breath as climbing over the boulders on this summit really helped us burn some calories.

We finally made our way to a high ridge and the terrain flattened out.  I showed Mary a beavertail cactus and mentioned how soft the pads were – kinda like leather.  I had touched one earlier in the day, and thought that it was weird that a cactus didn’t have needles.  Mary, who trusts me almost implicitly, gently stroked the cactus and agreed that it was “velvety”.  We continued up the ridge.  I was in the lead and within a few minutes, she said, “Oww, I have something in my fingers”.  Looking at her hand, I was surprised to see about a dozen or more tiny cactus spines lodged in her fingers.  I tried to get out as many as possible, but the plastic tweezers in the 1st aid kit, were too big. I felt bad for her and learned a valuable lesson – don’t pet the cactus.  Actually, Mary probably learned a valuable lesson too-don’t believe everything John says.

After reaching the ridge, we started to pick our way down the mountain.  No trail here, just an escarpment of boulders and scree (talus) that moved beneath our feet.  900 feet below, the desert floor teased us.  There was no path here, and the grade varied between 30-100%.  A 100% grade is equivalent to about a 45deg angle.  Covered with loose rock, it was not fun or safe, so I tried to avoid the extreme grades on the way down.  So, the off trail adventure turned into a “hiking down the talus slope” adventure.  My wife, who I am now convinced is one of the toughest girls you will ever meet, extended her hiking poles and followed me down the mountain. 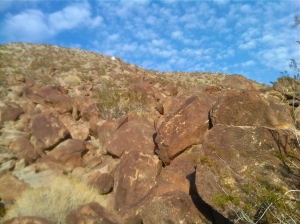 Down the talus slope.

We were doing fairly well, and the altimeter on my GPS indicated we had dropped down about 500 ft. but picking the path down was difficult.  Oh, we did see evidence of the Bighorn Sheep.  Lots of “sheep dip” on cliffs and under boulders, but no sheep.  I remember our conversation going down as we joked about how crazy it was for two fifty+ year olds to be doing this and how the sheep were probably laughing at the bipeds slowly making their way down.  Then it happened.  I remember hearing rocks and gravel tumbling down behind me and by the time I turned around, she was on the ground with a dazed look on her face.  Mary had slipped and rolled down the hill about 10 feet.  Her hat and poles were behind her and she asked if her head was bleeding. She told me that other than bumping her head, she felt a bit lightheaded.  I did a quick assessment to ensure she wasn’t seriously injured and then she told me something that we will laugh about for years to come.   In a calm and monotone voice, she said “There’s a rock on my arm”.   I glanced over and yes, there was a 5 lb. slab of granite on her forearm.  Hoping that it wasn’t attached to her arm, I lifted it off and tossed it aside.  We spent the next 10 minutes or so ensuring that she was ok, prayed together and asked the Lord to give us a safe journey and we continued down.   Other than taking it a bit slower, she never complained or whined about anything.  She was a bit upset about the tear in her pants, but I assured her that REI would take anything back.

NEXT: Hummingbird, stars and Hedwig.