Wherever we go in the mountains, or indeed in any of God’s wild fields, we find more than we seek.

John Muir – My First Summer in the Sierra

The last day was bittersweet.  Ready to finish our week on the trail, we broke camp after a light breakfast.  We filtered water at the creek last night and the flow was just a trickle, full of water bugs.  The mosquitoes were relentless at the creek and we were glad that we didn’t camp near there.  Generally, it’s not a great idea to pitch your tent near calm or stagnant water. 🙂

The John Muir trail guide was very helpful as it listed plenty of campsites – all were spot on.  Today, as we made our way toward the Half Dome spur we met a large group on their way back to their base camp.   Seems that the area we stayed in is often used by those who climb the dome.  This group must have left camp around 4 in the morning to climb the rock.  I’m sure Half Dome is a neat experience, it just wasn’t on our itinerary.  Remember, as they say on the A.T. –  “hike your own hike”. 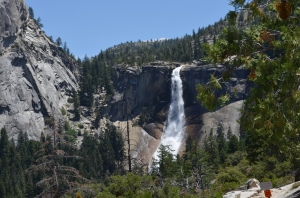 As we passed the spur trail to Half Dome, we started seeing a lot of people.  Alas, the splendor and solitude of the JMT started to fade.  Within the next 30-45 minutes, we would come across more people than we had seen all week.  It’s probably the main reason we don’t do the main attractions, too many people.

Continuing through Little Yosemite Valley, it seemed like a decent place to camp, but looked crowded.   We have enjoyed the ability to pick out our own campsite on the JMT.   The Merced River came up beside the trail and the smell of jasmine filled the air.  Well, I thought it was jasmine, but they were probably fragrant mountain dogwoods with beautiful white flowers.

The Merced at this point was leveling out prior to the leap over Nevada Fall, and it was deceitfully calm.  Clear with a slight green tint, this water has traveled many miles from its’ snowy origin.  We passed the junction to Vernal Falls and the Mist Trail and emerged on solid granite.  Dropping our packs, we removed our shoes and dipped our feet in the cool waters.  Some adventurous souls were wading out into the river.  We were probably two hundred yards from the precipice, but it still unnerved me to see people in the water.  Almost every year, someone gets too close and is swept over the edge.  On the other side of the Merced River, a foreign tourist had climbed down and was within 6 feet of the edge.  This was surely a Darwin Award candidate so I took his picture.

We filtered some more water as the day hikers watched.  One gentleman asked me if it was safe to drink.  I explained that if it was filtered, yes.   After a while, my brother and I ventured over and took some pics.  The whirling cascade just puts you in awe of the power.  John Muir captured this with eloquence:

The Nevada is white from its first appearance as it leaps out into the freedom of the air. At the head it presents a twisted appearance, by an overfolding of the current from striking on the side of its channel just before the first free out-bounding leap is made. About two thirds of the way down, the hurrying throng of comet-shaped masses glance on an inclined part of the face of the precipice and are beaten into yet whiter foam, greatly expanded, and sent bounding outward, making an indescribably glorious show, especially when the afternoon sunshine is pouring into it.

Ready to complete our journey, we got back on the trail and began the longest stretch to the valley floor below.  I’m not sure why it seemed long, maybe because we were mentally finished.  The stretch from Nevada to the valley was tough on our tired feet.

The scene at Vernal Fall bridge was chaotic.  People, like ants milled about seemingly without direction.  At least ants have a purpose.  We just wanted to get through the throngs of people so we trudged on.  I am sure that we looked haggard after a week on the trail, but it felt good to be near the end.

The asphalt sidewalk on the Mist Trail was another reminder that we were back in civilization.  It felt awkward to walk on it with our poles clacking about.   “Move over people, make a hole, real hikers coming through!”  I wanted to say that, but my subconscious did not prevail.

At the end, the sign that lists the various trails was our last photo-op.  While the sign showed 211 miles for the JMT, we actually only did our 68 mile section.  It still felt good and I was proud of my wife and brother for completing it.

The shuttle ride from Happy Isles to the Visitor Center was tough.  Throngs of people made their way on the shuttle and we were separated from my brother.  We eventually found each other and enjoyed a good sandwich from the deli.  The YARTS bus stop is across from the Visitor Center.  In the summer, it leaves once daily at 5 p.m.  from the valley and makes multiple stops on the way to Mammoth Lakes.  For $18, it was a wonderful ride, comfortable with amazing scenery.  Google YARTS and you will find the various schedules.

This was a good way to get back to our car in Mammoth.

Emery Lake from the YARTS bus.

For the next few weeks, the memories of the trip would resurface and we would laugh about things that happened.  It was an amazing journey and one that created great memories.  I did push my brother and wife hard on this trip, but they persevered and made it through.  It doesn’t take an athlete to do backcountry hiking.  It takes a desire to explore and the ability to push yourself a bit beyond your limits.