The first night’s sleep on the trail went too fast.  Leaving the rainfly off the tent, the cool air from the stream enveloped the tent causing us to retreat deep into our sleeping bags.  The sound of the rushing stream nearby is the perfect way to nod off.  In the morning, it must have been in the 40’s as it was brisk.   It was tough to get up early, in fact both of us were awake at dawn.  However, our bodies said go back to sleep so we did.   After a quick breakfast, we would pack up and top off our water.

The trail continued to follow the Big Wilson and we would cross over a couple of brooks before arriving at our opportunity to ford a big stream.  As we reached the bank, we were a bit hesitant, but excited to cross.  The water was moving at a decent pace, not as cold as the water in the Sierras, and there was a rope that went across.

I’ve never forded a stream with a heavy pack, so this would be a new experience.  Putting on some river shoes, we would unbuckle our packs in case we tripped.  I gave Joe one of my trekking poles and we held the rope with the other.  The water was above our knees, and other than the challenge of walking on top of slippery rocks underwater, the crossing was uneventful.  I’ve heard how these streams become rushing torrents after a heavy rain or Nor’easter, but not today.

We would dry our feet and get back into our hiking shoes to begin a gradual up/down track.   The trail was a mixture of boggy areas and granite or slate boulders.  Crossing multiple brooks, we arrived at the next large stream around lunchtime.  This one appeared wider than the Big Wilson.  Looking over the map, it appeared to feed the large Lake Onawa that we would see from the Barren Ledges.  The rope on this crossing was not as nice, but we forded this stream and started to feel more comfortable with water crossings.   While eating lunch on the banks of this stream, we watched another northbound hiker boulder hop across the same stream we just forded.  He had some long legs, because if I had tried that, I would have been floating downstream like a log.  This guy ended up being from Ireland and  was on a fast pace.  Afterwards, I would call hikers like this “fast movers”.  In my Navy days, that’s what we in the aviation community would call a jet.

After lunch, we began a slow, difficult 2,000 ft. climb up to Barren Mtn where we would get our first decent views of the surrounding country.   I might add it was slow because I was the slacker.   Joe would power up and patiently wait for me as the weight of my pack slowed me like a boat anchor.  The scenery at the top was stunning.

On our 2nd day,the climb up Barren Mtn was hard, but little did I know that by the end of the week,  we would experience over 30,000 ft. of elevation change.  Up-down-up-down.  Why can’t the trail just go up one side of a mountain and down the other?  Today would be a longer day, around 12 hours and we would make camp at the base of Fourth Mtn.  Oh my goodness, they give the mountains numbers?

Fading sun on day 2 in the Barren Mtn range.

On day 3,  I told Joe that my ibuprofen tablets were Skittles because I took so many of them.  Well, actually I took a couple at night and usually around lunch.  This painkiller is the best thing to have on the trail.  My first aid kit was like a paramedics kit – I had some of everything.  Joe, who carried the map gave me the bad news.  Today, we would climb four mountains.   Crud, I thought we were climbing a mountain named Fourth Mtn.  I silently prayed “Lord, give me strength because I don’t want to climb four big hills.  Admittedly, it would turn out to be the hardest and longest hiking day of my life.  The climb up the mountains wasn’t just ascend on one side and descend on the other.  The trail would go up some, down, up, up and down.  I was starting to get upset when I realized, what is there to get mad about? Are you going to get mad at the trail – you chose to do this!

On the trail, your body burns between 3,000-5,000 calories per day, depending how far and fast you go.  By lunch, I was out of energy and running on empty.  Lunch was tuna, a tortilla an apple and carrots.  One of the difficult things to do on a long hike is to pack foods that have the protein, carbs and nutrients that your body needs.  My day became a day of mountain purgatory.  Up one, down another.  The forest was a mix of oak, maple and various conifers depending on the altitude.  Sometimes, the young pines and firs were so thick, you couldn’t see 10 ft. into the woods.   There wasn’t much wildlife to speak of – plenty of frogs along the way, a few snakes, but mostly birds.  If it wasn’t for the birds and the wind blowing through the trees, it would have been very quiet.

Looking down from the Chairback Mtn range.

The last mountain of the day – Chairback had a treacherous 250 ft. descent through a slide.  Not a kids’ slide, but a class 2 rock climbing adventure.  A tumble here and you would find yourself in bad shape.  We slowly picked our way down, well – I slowly picked MY way down.  Joe was at the bottom but didn’t see the blaze for the trail.  I happened to see a “cairn” – one of those nice little stacks of rocks that previous hikers made to mark the trail.  Farther on, we would see a white blaze and continued our descent into the Pleasant River Valley. 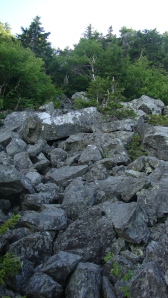 Looking back at the Chairback Mountain descent. It was wicked.

We kept going down as the daylight dwindled.  It became a race to make it to the West Branch of the Pleasant River by nightfall.  It flattened out for the first time in three days.  We passed a group of girls camping, and two who were sitting in the middle of the trail eating.  I almost tripped over them as I had gotten used to the darkness on the easy terrain.  By the time we reached the river, it was dark.  The river was actually fairly shallow, just under the knees and about 150 ft. across.  We both crossed without incident, hoping to set up camp as we were around our 13.5 hour mark of hiking.

No, no, no!  “No camping”, the sign said.  We would just have to find a flat spot up the trail to pitch our tent.  30 minutes, went by, one hour – no suitable locations.  Taking a break after crossing one of many bogs, Joe and I sat on a rock sipping water and staring at something that was moving on the other side of the trail.  It was big as my hand and was an iridescent off white color – and moving.  “What is that?” we said out loud until it became airborne and flew right at our heads! Thump, it would bounce of my head first and then off of Joe’s before flying away.   First we tried turning off our lamps, but couldn’t see anything.   It would continue to dive bomb us, hitting us in the head, chest and arms until we ran away screaming up the trail.  Well, kinda ran away.  We would hop from rock to rock across a muddy bog until it lost sight of our headlamps.  Afterwards, I would name this monster “Mothra” and Joe would call it “Mothzilla”.  It would be our most exciting creature encounter so far.

We continued on, up and down, over roots and through the bogs.  Joe would venture ahead moving faster and looking for a campsite.  I would hike alone in the darkest woods ever.  Then again, I’ve never hiked in the woods in the dark by myself.  It would have been kind of spooky had I given it much thought.  Beyond tired, I was running on the desire to find a site and collapse in the tent.  After another hour of following the white blazes, I caught up to Joe and we proceeded downhill on a trail that was 90% roots.

At the 15th hour of hiking, we found a site relatively free of rocks and roots.  We pitched the tent, cleaned up and were asleep within minutes.  Now, that was a tough 3rd day.  Zzzzzzzzzzzzzz…..

This entry was posted on July 28, 2012 by hikingonemileatatime. It was filed under Appalachian Trail, Camping, Hiking .

thelatebloomerhiker.com is a participant in the Amazon Services LLC Associates Program, an affiliate advertising program designed to provide a means for sites to earn advertising fees by advertising and linking to amazon.com.
Loading Comments...
Comment
×
%d bloggers like this: