Yosemite in the Fall Part IV: The Mist Trail 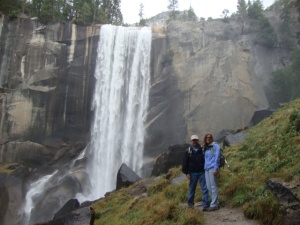 Waterfalls have a special allure to us.  Not sure why, maybe it’s just the sheer display of power.  During this time of year in Yosemite, the volume of water is fairly low.  Still, recent rains provided life to Yosemite Falls, so there was hope that Vernal and Nevada would put on a show for us.

This hike started on the valley floor as we parked in the Day Use area and walked the relatively flat couple of miles to the Mist Trail.  We would pass the campgrounds where people were just waking up and cooking their breakfast.  The smell of bacon wafted on the air as we passed by.  I imagined a tall stack of pancakes with maple syrup and, oh I’m sorry this is a blog about hiking not food.  Hiking just makes me hungry.

Early morning is the best time to start a hike, it is a different experience.  The first part of the trail was asphalt and you got the feeling that you were in a municipal park somewhere.   It gradually became a steady incline.  You could hear the Merced River and occasionally get a peek at it as you make your way up.  We crossed a footbridge with our first good view of the river as it made its way down the canyon.  The sound of the water rushing over boulders was getting louder the closer we came to the falls.  The path became less structured and the effects of erosion were evident.  The sound intensity of the falls gradually increased as did the incline on the trail.

Soon, we could see slabs of rock carved out that was to be our path to the top.  It was like the stair-stepper from hell.  Often, you were almost crawling to get to the next slab.  The closer you got, the wetter the rocks were.  It was exciting and a bit disconcerting if you thought about what would happen if you would trip.  We paused to take some pics, now noticing the mist from the falls.  I imagine that at full flow, you would be drenched as you made your way through here.  The last set of steps would be a narrow path cut out of the cliff with a railing to hold on to.

Looking down the "steps" near Vernal Falls.

The area at the top of Vernal Falls has railings that will allow you to get within a few feet of the falls.  The precipitous drop looked radical.  Within a year, several more people would die here – being swept over the falls as they foolishly climbed over the railing.   The water actually wasn’t that deep near the falls, but boy was it swift.  We would have our lunch here as the ground squirrels bravely made their way to your feet for the crumbs.  Ever the mischievous one, I threw a few breadcrumbs at Mary’s feet to see how close they would get.

After lunch, we started making our way to Nevada Falls.  Most people would turn around here and head down.  We ran into a couple and the man asked us if we had something to fix his shoe.  I looked at his shoe, the bottom was flopping around like a beaver’s tail.  After laughing at his predicament, I gave him some rope and he secured the sole.  They took some souvenir pics with us and we continued up.  On the way up, we were passed by a group of young German guys.  The hike through the forest was peaceful with the leaves changing, the leaves bright green,yellow and orange.

Between Vernal and Nevada Falls in October.

We came to an opening and the falls popped into view.  Thinking that we were close, we noticed that the top of the falls were actually a couple of hundred feet higher.  The path there was another crawl over even steeper steps that required a break every 3-4 minutes.  Well, at least there were steps.

The top of Nevada Falls really opens up like one huge slab of granite with a river running through it.  There was a stiff breeze that would take your hat off.  The sound of the falls was intense, like mega white noise.  You had to yell to hear each other.

We spent some time checking out the area which we had to ourselves.  So the trick is get on the trail late in the day, by early noon most of the people were gone.  Of course in the summer with thunderstorms around the afternoon, this wouldn’t be a good plan.  We would cross the Merced River over a footbridge.  It took a little while to see where the trail picked up, but soon the John Muir Trail came into view.  It was a nice descent down to the valley floor.  A good 8 miles from where we parked and 1,900 ft. of elevation gain.  This combo is a good cardio workout with some excellent scenery.  But hey, where in Yosemite is the scenery not excellent?

Nevada Falls and Liberty Cap as seen from the John Muir Trail.

This hike would be the last on this trip to Yosemite.  Our goal is to be up here at least once during each of the four seasons.  The Sierras take on a different character during each.  Can you imagine snowshoeing to Sentinel Rock at night during a full moon?  I can!  Enjoy life friends, God has blessed you more than you could imagine.  Get out and see what He has created.

This entry was posted on April 17, 2012 by hikingonemileatatime. It was filed under Camping, Hikes in the Sierras, Hiking and was tagged with Merced River, Mist Trail, Nevada Fall, Vernal Fall, Yosemite National Park.