Yosemite in the Fall Part III: The Hetch Hetchy Reservoir

Similar view of Hetch Hetchy Valley from Surprise Pt. before the dam. Circa 1910, J.N. LeConte

The Hetch Hetchy Valley has been called a miniature version of Yosemite Valley.   That is until the Tuolumne River was blocked by the O’Shaughnessy Dam starting in 1915.     The battle between the city of San Francisco and the preservationists of the day – including John Muir would eventually be decided in part due to the great San Francisco earthquake. The rest was political.  The dam was actually completed in 1923 at a cost of 68 lives and would forever change the pristine landscape of this area.  Today, we would trek to the northern boundaries of the park to see if we could imagine what this area looked like before the Hetch Hetchy Reservoir was created.  After you’ve hiked in the backcountry for any length of time, you find yourselves seeking the path less traveled.  To us, it’s worth driving the extra 30 or 40 miles to get away from the tourists.

To get to Hetch Hetchy, you must pass through an area named Mather that draws eccentric (hippies) people who camp and who knows what else.  The road is a maze with no clear directions and you get the sense that Janice Joplin is in one of the tents around here.  A little farther up, it became apparent that the reservoir is now under the protection of Homeland Security with controlled access.    We would obtain our day pass at the ranger station and wind our way down to the dam over a narrow mountain road  to the dam.  Nearby is a sign to the Poopenaut Valley Trail which descends to the Tuolumne River.  Who comes up with these names? Indians?  I would have died laughing if it was named Poopenutter.

The hike starts on the dam  where you have nice views of the reservoir and spillway below.  There are plaques that explain the history of the dam and all that blah blah tourist stuff.  The road on the dam continues into an old train tunnel which is lit by dim light bulbs every 100 ft. or so.  Due to the recent rains, or maybe it just leaks a lot, there was standing water and we puddle jumped our way through it.  We could see the light at the end of the tunnel, no longer was it a cliche’.  🙂 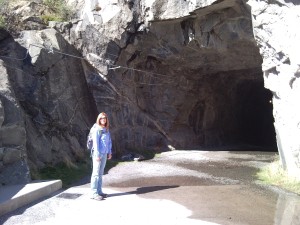 The path out of the tunnel is fairly level  and wide with a steep drop into the reservoir.  We came upon some illegal crops growing off the path and took some pics.  Well, to us they looked like some type of cannabis, but were probably some variety of hemp.  It made for a good photo op to a couple of goobers like us.  Other flora included manzanita, the odd red-barked bush, monkey flower and  lupine. As the trail wound its way around we noticed that there were many streams that flowed over and under the trail into the reservoir. 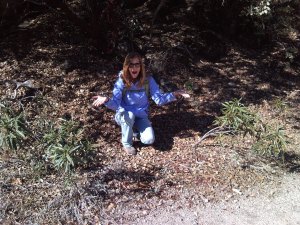 Parts of the trail passed over large slabs of granite and descended into areas of tall grasses and woods.  We stumbled upon our first mule deer of the day who watched us from a distance before darting into the cover.  We would take our lunch break on a rocky outcropping overlooking the water.  Compared to the Tioga Road, it was noticeably warmer in the Hetch-Hetchy.   The relatively lower altitudes and mostly sunny day reflecting off the granite made it almost hot.  We crossed an area that would normally be a steady, wide creek but the late season made it a series of small streams.  The water was cold and gurgled as it passed underground. 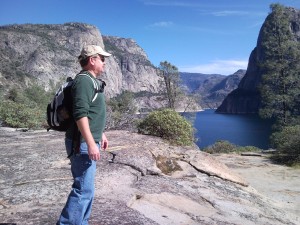 Looking out on the Hetch Hetchy.

As we neared the 1400 ft. Wapama Falls, we could hear it before we saw it.  Alas, we rounded a corner and saw it from about 1/4 mile away.  Up ahead we saw a guy taking a lunch break and the trail was blocked with yellow police ribbon.  A sign indicated that the footbridge had been swept away due to the recent heavy rains and snow melt.  We hesitated bypassing the sign but prudence dictated otherwise.  Usually park rangers close trails when an incident has occurred or the hazard is extreme.    The bridge was repaired and eight months later in June 2011, two hikers were swept to their deaths when they tried to cross the Wapama Falls bridges after a storm.  Water, even when shallow has the ability to sweep you off your feet.  Today, we would just have to admire the falls from a distance.

This would be a short day hike for us, but it left us longing to come back here another time.  Perhaps, next time we will make it to Rancheria Falls, a 13 mile trip.

This entry was posted on April 12, 2012 by hikingonemileatatime. It was filed under Camping, Hikes in the Sierras, Hiking .