The Tioga Pass Road was open this late in the winter one other time.  In 1999 it was open for a week before closing on January 1, 2000.

We decided on a four day getaway to get a winter glimpse of Yosemite.   Having visited in the fall, we were hoping to do some day hikes in the northern sections of the park near Tuolumne Meadows.  A winter storm could close the Tioga Pass Road at any time, often for 6 months or more.  This was a rare opportunity to drive this road and avoid the bulk of the winter tourists, who gravitated toward the Yosemite Valley and Badger Pass Ski Resort.  Since we didn’t have snowshoes, we were hoping to find some accessible trails.  With maps and GPS in hand and bundled for the 25 degree temps, we hit the Glen Aulin trail near Lembert Dome.   What a  pleasant surprise to find mostly snow covered trails.  The last time it snowed was from a November storm.  Due to the frigid nights,  it was a hard, crusty snow and the trail was easily discernible due to the footprints of those that had gone before.

Easily discernible until we hit the first frozen creek that is.   The Glen Aulin trail starts out following the Tuolumne River which was partially frozen as it meanders around the meadows.  The creeks that normally fed it were frozen solid, or were they?  Not having any experience crossing frozen water, we diverted upstream to a narrow crossing, found a fallen log and quickly lost the trail.  We discovered more frozen streams and creeks and the white landscape with granite bolders made for a serene, beautiful view. 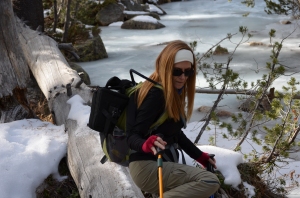 First of many frozen creek crossings

I discovered my maps of Yosemite with well marked trails, had grids that were approximately 1000 meters square.  My GPS provides coordinates that when plotted on these maps gets you to within a few hundred meters.   A trail that is 2-3 feet wide, and covered in snow with 200 ft conifers obscuring most landmarks becomes very hard to find.  Oh well, we had plenty of daylight, warm clothes, lots of water and a chance to work on my land navigation skills.  Ok, so my map skills have atrophied, but I knew that most creeks empty into a river.  Well sometimes they end at a waterfall.  Mary, who has learned to trust my bumbling ways, patiently followed me as we picked our way through deeper snow and 20% bolder covered grades.    After an hour , we found Dingley Creek, did our best attempt at the balance beam (log) and ended up on the trail again.  A quick lunch and we were headed towards Tuolumne Falls, the new objective.

We came to a cliff face and lost the trail again.  We knew that we had to get down to the river, so we did some bouldering and dropped down about 40ft.  It was fun and scary at the same time.  Afterwards, I thought, “thank you Lord for keeping us safe.”  We made it to what was Tuolumne Falls with a neat footbridge.  The river was completely frozen at this point and we could hear gurgling under the ice.

The shadows were getting long and we hoofed it back.  Mary, who is like a horse heading back to the barn on the return leg, missed the bear tracks and scat.   She did keep me on a good pace and the trip back was uneventful.

Lessons Learned:  1. You will often get lost when hiking.  Keep your wits about you and don’t panic.  2. Unbuckle your backpack straps when crossing water, even if it is frozen.  A pack can pull you under.  3. Hiking is more fun if you do it with someone that you enjoy. 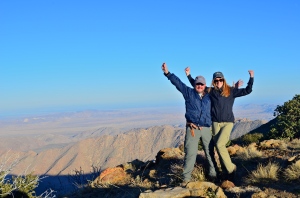 So, in the past couple of years, we have logged about 350 miles. I’ve done about 60 solo miles and 35 or so in the backcountry with some crazy Marines. All of the hikes with Mary have been day hikes  ranging from 3-12 miles.  Most of the trails have been established and fairly well marked.  Sometimes, the trails are not obvious and you just wing it.   That brings us to the most recent hike in the Laguna Mountains Recreation Area.  Located at the southeast end of the Cleveland National Forest, the Peninsular range  has some of the most amazing views in southern Cali. Alpine like landscape to the west and the Anza Borrego Desert to the east.  The famous Pacific Crest Trail (PCT) passes through here before entering the desert.  It’s my favorite area to hike.

With our usual late start, we arrived near the Big Laguna Trailhead and started our way to Monument Peak.  We allowed two young Marines to pass who were apparently doing a section hike of the PCT.  Their big packs dwarfed my daypack, and I almost envied their long journey.  We came to a junction  and could see Monument Peak with its’ array of microwave and cellular antennas nearby.  What I’ve learned is that while a landmark may look close, the path to get there is not. We continued down the trail, rounded a bend and the late afternoon sun made the desert vista pop.  Words can’t describe the various colors you see along with the contrast of peaks and canyons below.  We missed the unmarked trail to Monument Peak and decided to scramble up an adjacent peak to see if it was possible to get there off trail.   I think Mary was raised with billy goats because she bushwhacked her way up the first summit faster than you could say “supercalifragilisticexpialidocious”.    We made the first hill, climbed and picked our way around the chaparral before finally arriving at a fenced in laser testing facility  near Monument Peak. I wondered how and why they tested lasers up here.  Do they bounce them off of coyotes and rabbits? Hmm.  The winds were about 20-25 mph and made the cool air feel much colder.  We hit the summit, and could see for over 50 miles in each direction.  The Coronado Islands were to the west, and the Salton Sea to the east.  We got some good pics and started to look for the way back.  The trail we came up on was out of the question because, well it wasn’t really a trail.  The sun was starting to go down quickly and we knew that we needed to get off this peak as the temperatures drop quickly.

I could go on about how we made our way back, but the unplanned route down the access road, through the woods and back on another section of the PCT made this hike a little longer than planned.  We ended up on the highway about 3/4 mile from where the staging area was and jogged down the dark Sunrise Highway with our headlamps bouncing around.   We made it to the trusty Celica where I asked Mary to draw her name with the red lens on her lamp while I set the camera for a long exposure.  She humored me for a bit before giving up to thaw out her slightly frigid hands.  We logged about 5.5 miles on this one, half of it off trail.  While not really lost, we did end up off the planned route and a bit unprepared for the cold weather.

Lessons Learned: 1. Always have a detailed map   2. Bring clothing for all weather conditions (it was 72deg in San Marcos and 45deg only an hour to the east.)  3.  Running down a country road at night is kinda fun.

Thank you for taking the time to check out my blog.  It seems that almost everyone has something to say and this forum is a great way to do it.   If you are one of my Facebook friends, you already know one of the things that I love to do.  I am blessed to live in one of the most beautiful areas in the U.S. – Southern California.  If you love being outdoors, this is the place to live.  It is the most geographically diverse area that I’ve ever seen.  From the Pacific Ocean, to the mountains, to the desert – all a little over an hours drive apart.

So, hiking is something that I’ve come to enjoy.  While admittedly a novice of the trail, I’ve discovered that common sense is the most important skill that’s required. That and a good pair of shoes.  So,  overlook my grammatical errors, endure my dry humor, and I will attempt to share my experiences on the trail. 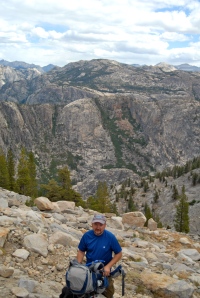